Jerusalem was busier than normal for the first day of the week after the Sabbath. You see, there had been quite an uproar over the crucifixion of a man some believed was a prophet and others thought was a lunatic. 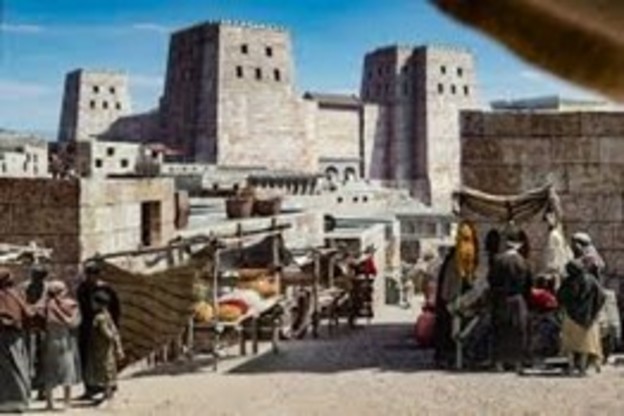 Imagine two residents of Jerusalem, Sarah and Jacob. They were up early because of all the noise outside. Sarah walked to the window to see what was going on. As she watched the crowd, she noticed people dressed in ancient clothing walking in the streets. At first, she didn’t know them, but after hearing one of them speak to her neighbor, she called to Jacob saying, “I think that person is Jeremiah, the prophet of old!” Jacob moved to the window. “My dear wife” he said with a chuckle, “Jeremiah has been dead for hundreds of years.” Sarah was not convinced and continued to watch the people gather around this man. She noticed another old man that folks were calling Moses. Some even kneeled before these people in reverence. With so many strangers outside their home, Sarah convinced her husband to go out on the streets with her to hear what they were saying. As they walked about, they saw many more of these saintly people, both men and women. Sarah and Jacob trembled with a fear they had never felt before. They listened carefully to these strangers talk and noticed that the conversation folks were having with these visitors centered around the man named Jesus, who had been crucified three days earlier! After listening intently to these people of old, Sarah and Jacob decided that this man Jesus, humiliated and beaten by their religious leaders and crucified by the Romans, was truly the Son of God. They went back into their home and wept bitterly because they had been part of the crowd that had shouted “crucify Him, crucify Him!”

Obviously, this is an expanded fictional characterization of an event as expressed in Matthew 27:52-53,
“… and the graves were opened; and many bodies of the saints who had fallen asleep were raised; and coming out of the graves after His resurrection, they went into the holy city and appeared to many.”

Undoubtedly, this event in scripture surely had a great immediate impact on its witnesses in Jerusalem. We can only imagine the content of the conversations between the citizens and the saints, and be fairly sure it was not about the weather. Even so, it is obvious that these conversations with the saints made little if any lasting impact on the Jews.

In a similar manner, people across the world today have numerous opportunities to learn the Word, and yet so many discount it completely.

Brothers and Sisters, of all the things we lift in prayer, let us not forget to pray continuously for the Holy Spirit to work in the hearts of all those that hear but do not believe!!! I think the saddest seven words in the Bible are in Matthew 7:23 where Jesus is sharing His final response to the unbeliever “depart from me I never knew you”.