Israel’s deliverance from Egypt was a miracle of power. It would be unbelievable from a human standpoint. But in preparing the people of Israel to receive the Ten Commandments, God recounted the events of the Exodus (Exodus 19:1-9). 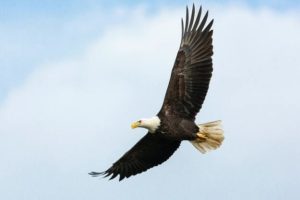 God tells the Israelites, “You have seen what I did to the Egyptians.” It was clear that it was not Israel, nor was it Moses and Aaron who brought about the recent deliverance. It was God Himself. The power of the enemy was broken, and it was God’s work from beginning to end.

God’s way of delivering the Israelites was said to be “on eagles’ wings.” The picture is that of being above man’s reach. They could not save themselves from the Egyptians.

It was now time for Israel to honor and obey God in response to His amazing grace and mercy. He called for obedience (Exodus 19:5). He placed conditions before Israel – as He does to us. He says to them “If ye will obey my voice indeed, and keep my covenant then you shall be a special treasure to Me above all people; for all the earth is Mine.” We try, as the Israelites tried, to have God’s blessing without regard to God’s voice. We want to have our good things, and keep God in the background. God wasn’t having any of that. He asked for obedience and faithfulness.

The end result of obedience and faithfulness would be a unique relationship with a nation that had never before been known. He desired fellowship with this particular nation, so they could be a testimony of God’s power and grace throughout the world.

God promised Israel that, if they were faithful, they would be an especially valuable people known for their purity and good works. Christians are also to be that special treasure (Titus 2:14). He also promised that Israel would be a kingdom of priests, having a direct connection with the God of the universe. They would represent mankind before God, serving as the “go-between” of the world. They would be channels for others to have access to God. He further said that they would be a “holy nation” – set apart for God’s purposes.

Israel agreed to these conditions, and wanted to receive these promises. “All that the Lord hath spoken we will do.” Israel recognized where they had come from, and eagerly accepted the Lord’s proposal.

God calls us to obedience and faithfulness today as believers in Jesus Christ. He promises a special relationship with all who call on Jesus and believe God’s promises through Him. We affirm, with God’s grace and help, that we will be faithful to God in Christ Jesus until death. But then, too, we recognize that our salvation is entirely by God’s grace; all we can do is respond in faith. There is nothing we can do to save ourselves, but cast ourselves entirely on the merits of Jesus Christ and His death on the Cross. Truly, that is being carried “eagles’ wings.”