One Thing I Learned from Dad

My dad would have turned 100 this Wednesday. As I reflect on his life, I’m more grateful each day for this good gift with which God blessed me. Dad loved Jesus and people, and set a good example for his kids as he lived his daily life. Almost weekly, I find myself repeating one of his sayings he used to encapsulate some truth.

One thing I’m particularly thankful for is his devotion not only to Christ, but to His Church. Other than when he was too sick, which wasn’t often, you could find dad in his pew every Sunday worshipping, praying, and singing his faith. And virtually every one of those Sundays, he also prepared and taught a Sunday School class. 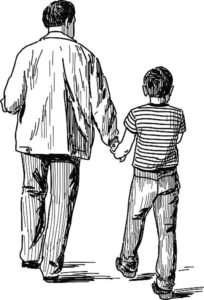 As I’ve grown older, I’ve realized how rare that habit is among fathers and how crucial it is for the faith development of their children. Instead of looking for excuses not to go, it was Dad’s determined decision to be present to honor the God who loved and saved him.

He didn’t go because he was less tired than other men. Dad often put in sixty or more hours a week wrestling deer heads, hides, and other game as a skillful taxidermist supporting his family. But that didn’t stop him from being in his place each Sunday before God. I’m sure there were days he felt like staying at home. But he didn’t.

I remember other men in my home church who were also faithful and regular. Men who farmed, made furniture, drove trucks, built houses, or did other demanding labor but who were present each week. Each set a powerful example for their families and all of us younger boys who are now old enough to decide for ourselves whether to attend worship or not.

A friend of mine shared with me how his father got mad over something at their church years ago, and that afterward his family never returned to that or any church. As a result, my friend grew up without a church family or the spiritual nurture it provides. Thankfully he has returned as an adult but not without years of drifting.

Anyone who’s ever been to church will readily admit none is perfect, and anyone who’s gotten involved in congregational leadership is even more certain of it. Beware, however, of walking away, for when we do, we send a message to our children that they will not miss. Jesus’ Church may be imperfect but she is His bride for whom He died and through whom He has chosen to accomplish His work in this world.

Church life is often challenging, but it can also be tremendously rewarding. When dad passed away in 2009, his church honored him with a service chockfull of people he had impacted. I’ve watched the same happen for other individuals in other churches who persevered to set good examples. It’s now time for us set those examples and to model faithful discipleship for others who are watching us.